"C. P. Goerz was founded in 1886 by Carl Paul Goerz. Originally, it made geometrical drawing instruments for schools. From 1888 it made cameras and lenses. During the First World War, Goerz´s main production was for the German and Austrian military. Goerz is known primarily for Anschütz strut-folding cameras, Dagor lenses and Tengor, Tenax cameras, (later continued by Zeiss Ikon) and Minicord subminiature camera. C. P. Goerz also made a series of telescopic sights for sporting rifles that saw some use during the shortage of military sniping rifles experienced during the early stages of the trench warfare that was to characterise much of World War I." - (en.wikipedia.org 30.01.2020) 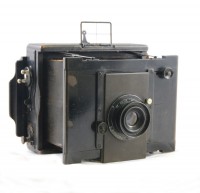